Madrid is a city foul of life & culture that is difficult to be discribed in few paragraphs. Artistically the city keeps it’s roots from the past, something that you do not find easily in other European modernized cities. The museums of the city & the attractions are among the best in continent, as long as the renaissance masterpieces buildings who most of them have being built in the 20th century.

Enjoy all the historic attractions & get deep into the history of the Spanish empire which significantly expanded the 16th & 17th century. Also there are a lot of facts that make Madrid unforgettable, either if we speak about cafe’s in impressive squares, or a drink/cocktail that you may anjoy in a roof top bar located in the last floor of a block of flats, or a relaxing walk at Retiro Park or Casa de Campo a sunshining day.

We prepared & present to you the best 5 attractions that you must not lose during your visit in Madrid. Let’s start so, to list them one by one:

Your visit at Prado Museum is absolutelly a must. The Prado Museum is one of the best & most famous art museums in the world. In it you will find an big collection of masterpieces by renaissance and baroque artists.

We suggest that you purchase your entrance ticket to the Prado Museum in advance to avoid the huge queue that usually exists outside. There are cases of people who come to the museum without having bought a ticket & amp; until their comes their turn to buy their ticket at the box office the museum is closed.In order to avoid such troubles we suggest that you have already purchased your ticket before your visit You will find relevant link below so you can buy your tickets online).

One of the most important projects to see is the Bosch Garden of Earthly Pleasures and David at the head of the Caravaggio Goliath. The artist with most of the works on display at the Prado Museum is the Spanish Romantic Goya, whose 14 Black Paintings are a Spanish cultural landmark.

The Retiro Park is a green oasis in the heart of Madrid full of elegant trees. Retiro Park is just steps east of the Prado Museum & amp; was a royal property until the end of the 19th century when it opened to the public.

If you visit Retiro Park with young children, boating in the Grand Pond next to the 12th Alfonso Monument is a fun choice on a sunny afternoon.

The iron and glass pavilion which was built to host the Philippines Exhibition in 1887 is magnificent and opens to the lake where in front of it are & amp; the various cypresses & amp; strange swamps that turn the color of the lake into a wonderful golden brown in the summer surround it.

The oldest tree in town is nearby: It is a Montezuma Cypress planted in 1633 and enclosed by an iron fence.

Builded in the mid of 1700 for the King Philipp, the Royal Palace of Madrid is located in the position of the Mauritans Alkazar fortress of Madrid, which was burned in 1734.

Royal Palace of Madrid is the biggest royal palace in west Europe & has a mix of Baroque & neoclassical style.

Do not be satisfied with the external observation of the building, you must enter to enjoy the full experience as the royal collections and the frescoes are wonderful.

There are works by Goya, Caravaggio and Velázquez, as well as stunning display cases of watches, wallpapers, porcelain and silverware. Here you can see the only Stradivarius string quartet in the world, and the Royal Arsenal containing the personal weapons used by Charles V in the 16th century.

Whether you are a supporter of the club or not, the truth remains that Real Madrid is most successful football team in Europe having won 11 European Cups, something that consists a record number.

So, if you are not a football fan, you need to configure your schedule in order to visit the Estadio Santiago Bernabeu, this huge 85,000-seat stadium, in which has several pages of football history have been written.

Doing a tour of the stadium will give you a complete & amp; panoramic view of it. You will have the opportunity to enter the locker rooms where the Real Madrid footballers & amp; of the opposing football club’s players are getting prepared before each match.

Also during your visit to the Real Madrid Museum at the Santiago Bernabeu Stadium you will see football trophies issued as & amp; jerseys of players who made history with the football club.

At the end of the route make a stop in the press room where the various interviews of coaches & football players take place after each football match.

Furthermore, during your walk in the stands of the stadium you will have the opportunity to take panoramic photos as well & amp; to see the presidential suite.

Finally, if you want, you can book your tickets to watch a football match of Real Madrid football team.

This large square next to the post office building, called Casa de Correos, is a popular meeting place, meaningful for both city and country. Almost every Spanish person will recognize the clock at the top of the Casa de Correos in Puerta Del Sol as this marks the annual television countdown on New Year’s Eve for the change of the year.

There is also a tradition during the ritual according to which with each stroke of the clock you should eat a grape for good luck (12 in total). Also in the square is the statue of El Madroño with the bear symbol of Madrid
from the Middle Ages.

El Madrono (The bear, symbol of Madrid), the statue is located in Puerta Del Sol of Madrid.

Also the statue of King Carol the 3rd.

The statue of King Carol the 3rd at Puerta Del Sol of Madrid.

Finally, normally at the Saturday nights, around 22:00 in Puerta Del Sol there are organised amazing performances from solo performers some of which totally worth watching them.

Holidays in Madrid ~ Plan the trip:
Flight tickets for Madrid: 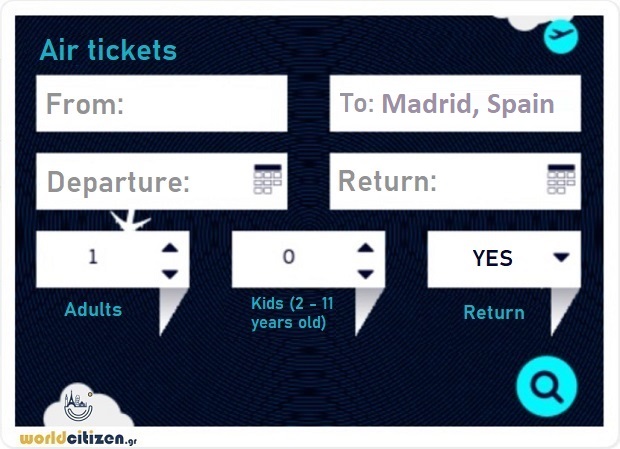 
Suggestion: For more comfort when visiting the sights in Madrid, we suggest you rent a car with which you can move easily all the days of your stay.

Rent a car in Madrid:

Sunday ride at the seaside part of Athens.
Monaco ~ The 15 best places to visit!
Glasgow ~ The top 8 attractions to visit!